STEAM Project for One 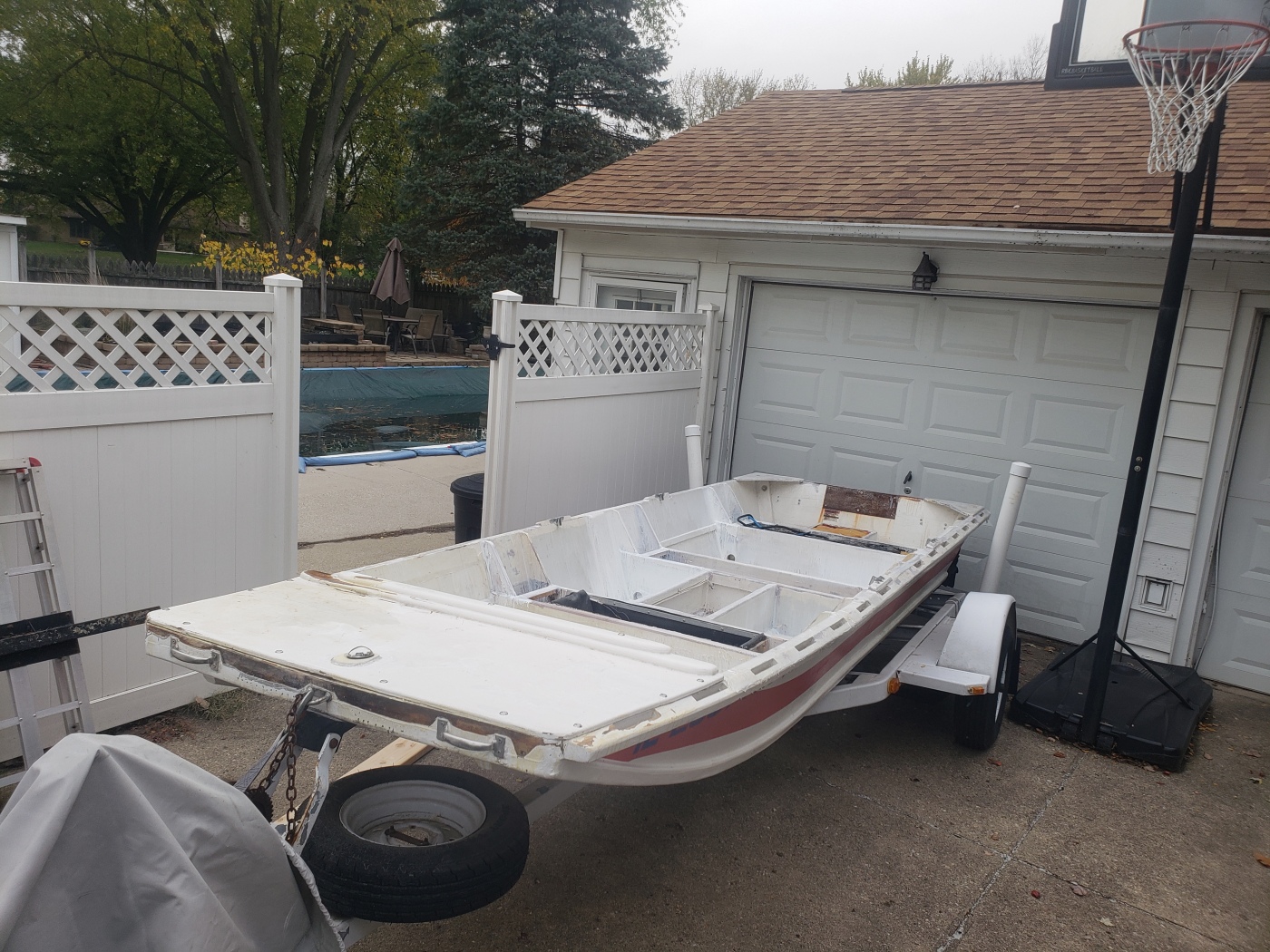 There is a spreadsheet in the bibliography that includes all of the relevant calculations for DNR approval of the boat.   You will also find links to the Illinois boat registration guide and to the Coast Guard Boatbuilders pamphlet.

At the end, you have a boat that should max out at a 25 HP motor, 5 persons, 762 pound capacity with a 982 pound total payload capacity.

By appointment, the boat was inspected by a DNR officer and passed.  FWIW, blogging provided a great deal of the information he required. A check sent to the DNR with a registration form and we are legal.  A hull number and registration number will follow via snail mail. Just for fun, I put Philip’s name on the title…and he signed his first legal document.

Seeing a long weekend, we trailered the boat to Grandma’s farm in Michigan– a big lake and a nice public boat launch made for the perfect test. I bought a trolling motor so even if the 9.9 doesn’t fire up, the boys get the boat in action. 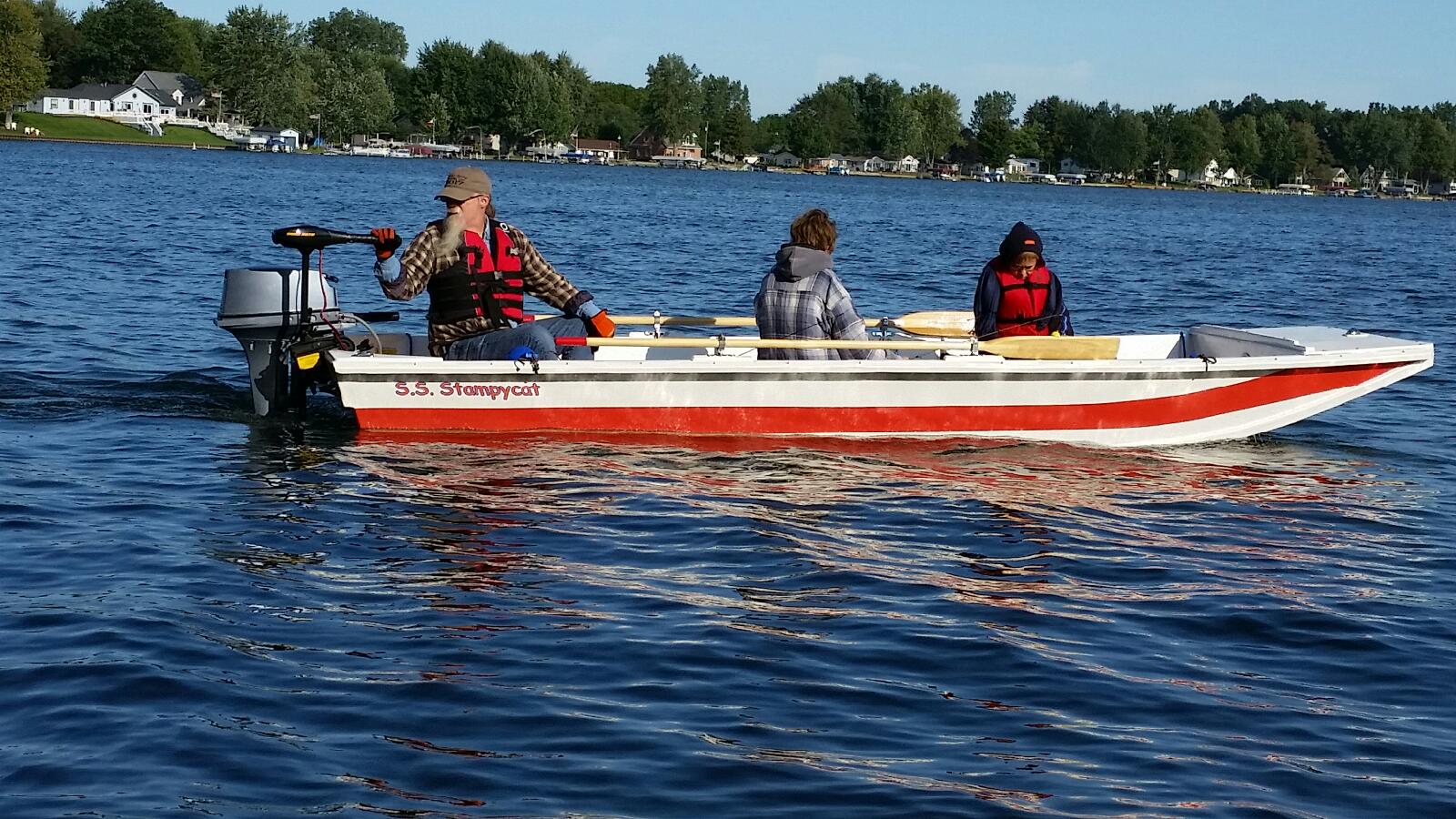 And there it is…floating, not leaking, and she even leaves a bit of a wake with the trolling motor at full throttle. And Philip?  He eventually stretched out on a seat using a cushion as a pillow…and took a nap in the sun. Philip found joy and contentment today.

What about the math scores? We are waiting on the initial scores this year, but last spring he was above average. And he was diligently doing math homework  the night before we left. without complaining.

The best part though is the smile… 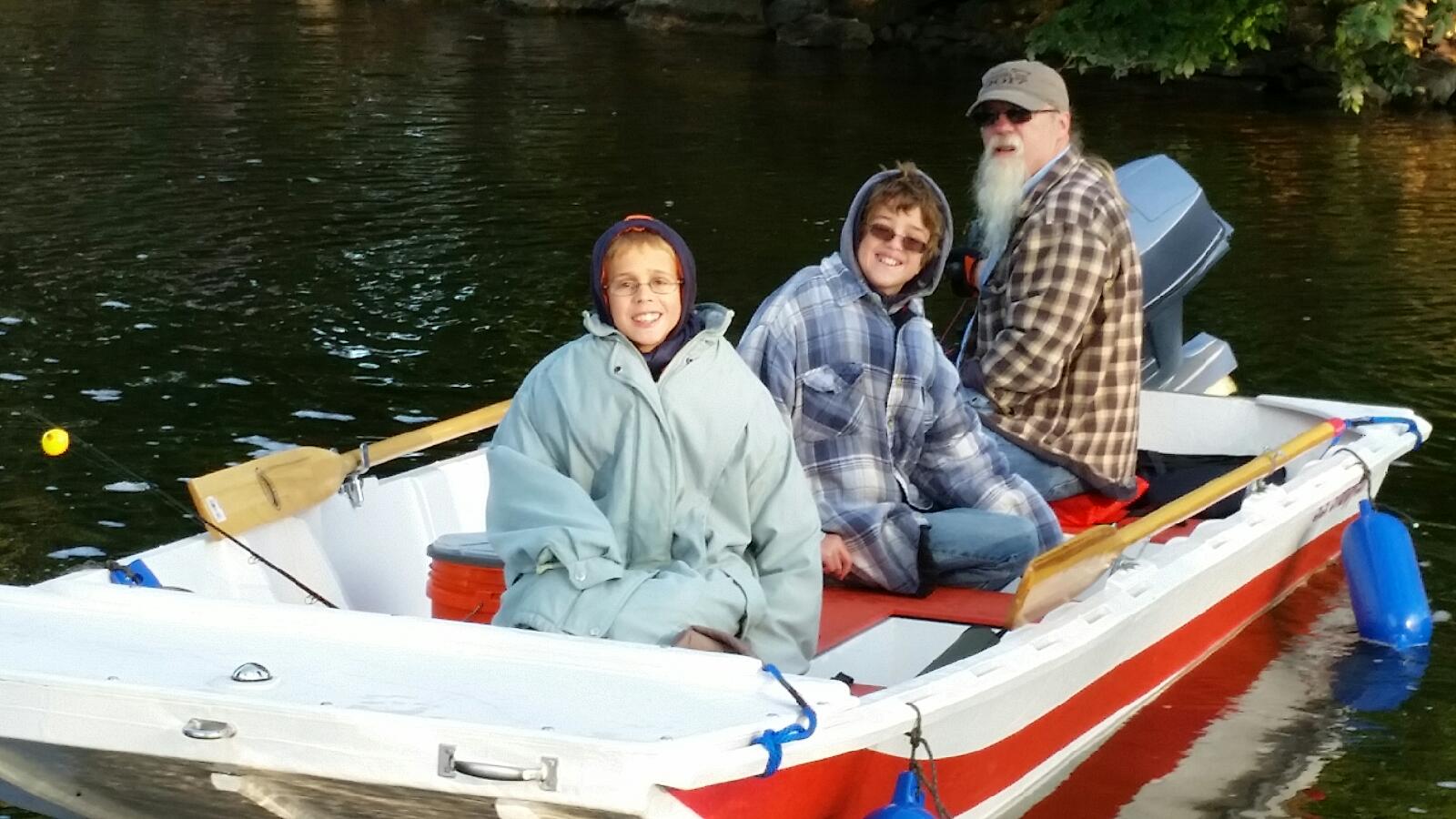 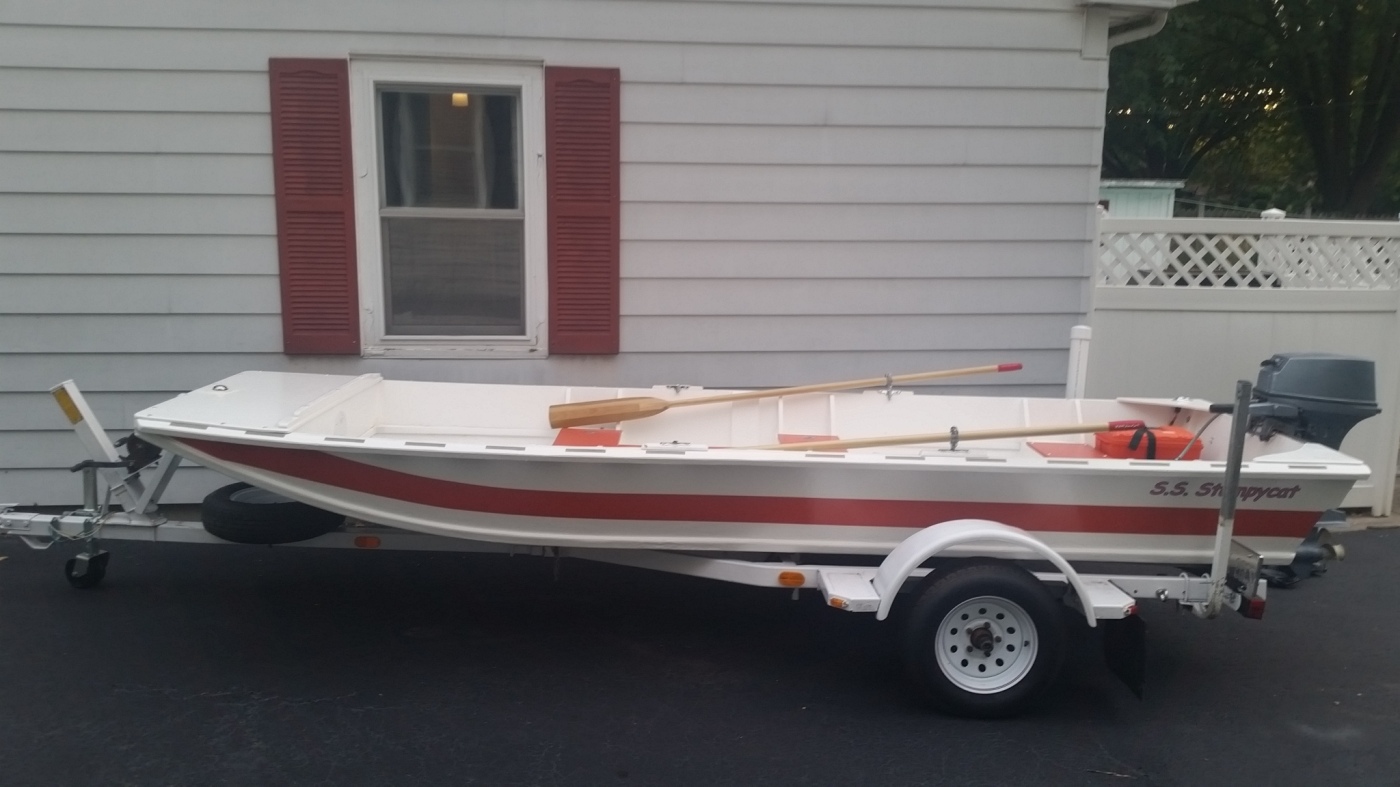 That’s an awesome looking boat! This post is just to explain some of the finishing tips.

Here’s the window from the inside. It still needs a little cleanup, but it is watertight. I know that because it filled with rainwater several times and didn’t leak a drop. 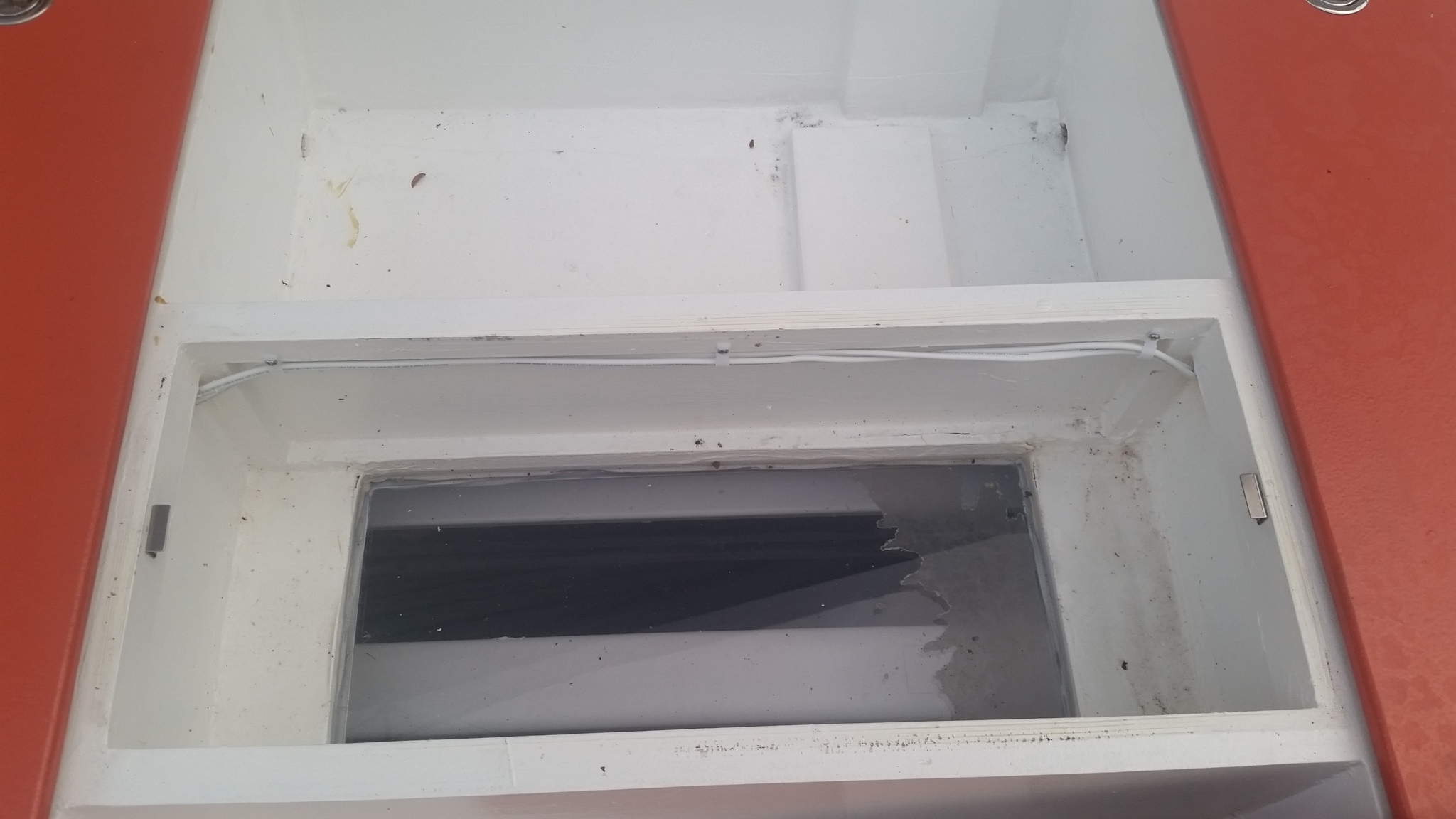 To anchor the fuel canister, we fabricated a bracket out of aluminum stock and threaded rod. It is glued to the side of the added flotation compartment and rides free of the bottom. Simply undo the nut on the threaded rod and the rod slides free and releases the canister. 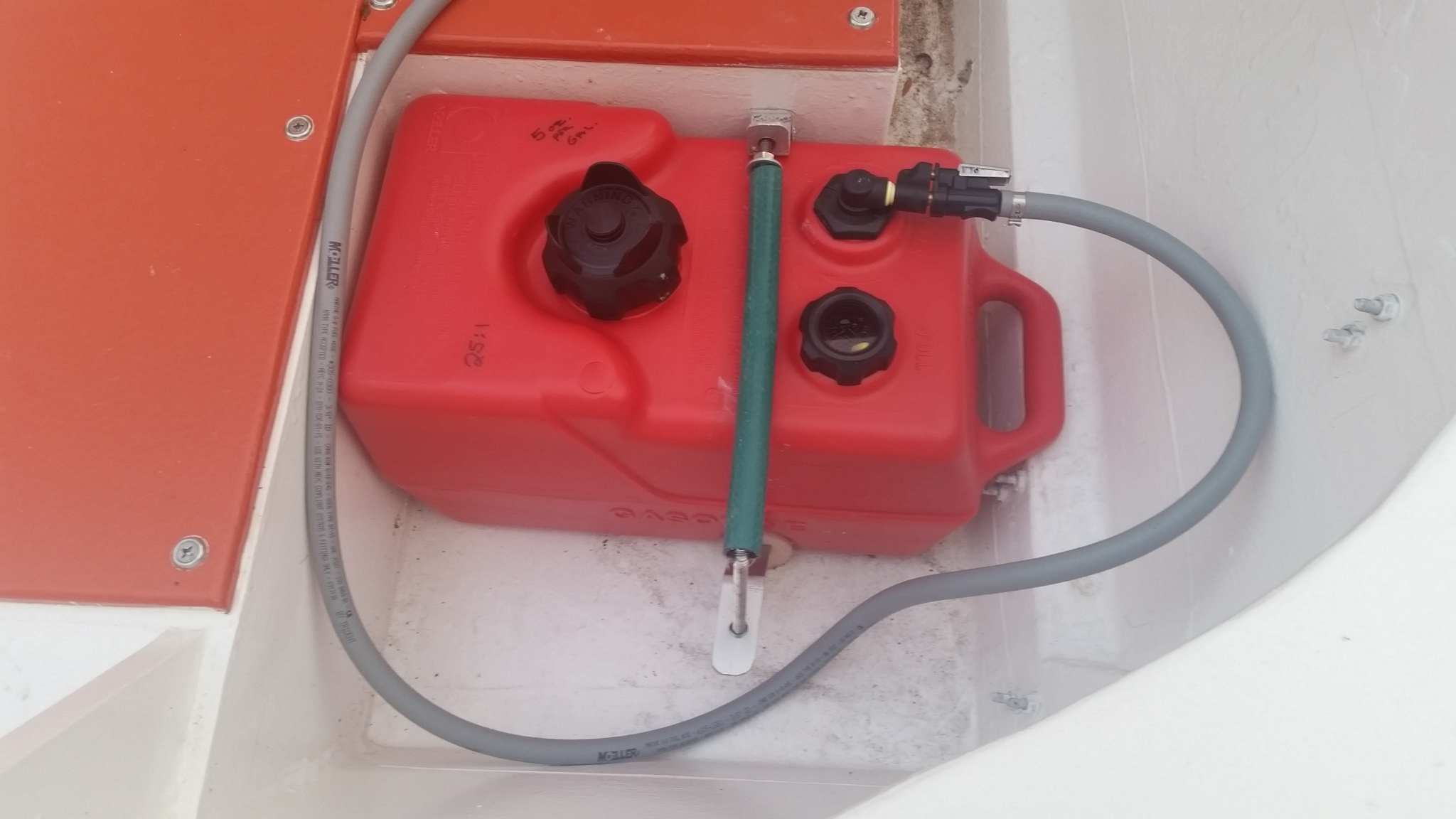 And then there is the battery compartment.  The boat is using an old  9.9 HP Yamaha 2 cycle motor.  the electric only runs lights, pumps and eventually a trolling motor.  The last item is why I had to sort out a large battery installation.

I bought into a system for electricity in kayaks…Yak Power. It’s not cheap, but it is functional and safe. Remember, my young boys will be using this boat. I did not buy the battery box though as it would have been under-powered. That meant building something that would provide the initial connections and anchoring the battery. There are several YouTube videos that work from various boxes and I relied on those and the Yak parts to assemble something  from a Flambeau tackle box. It straps down with standard battery straps. The relay based Yak switching unit plugs into the box and gives me 5 circuits. 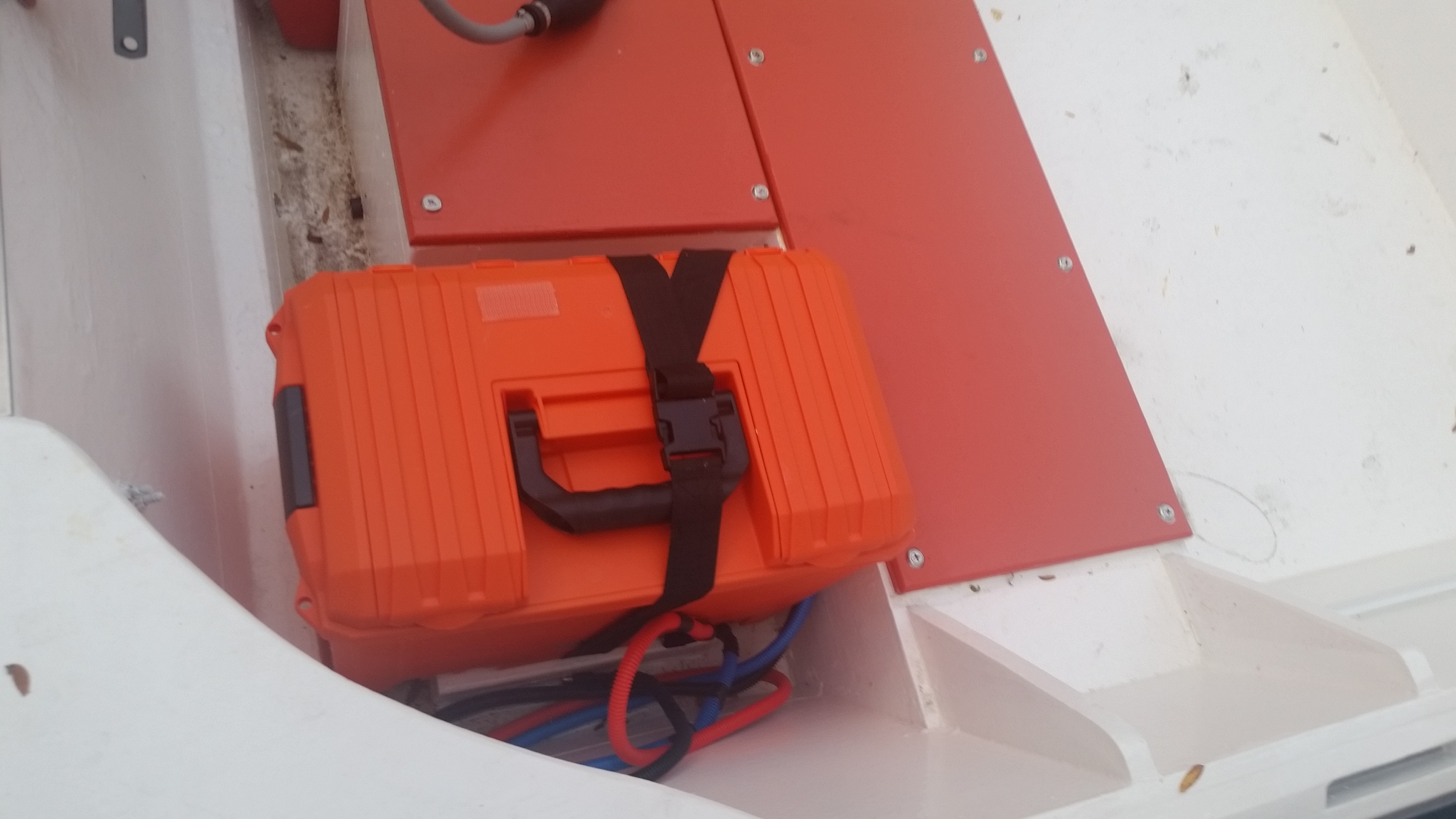 And then there is the stern. You can see two eye bolts for strapping to the trailer.  There are three handles, one set low to provide a step into the boat from the water. Oars are installed, the motor mounted, and the lights work.

And then their is the seat arrangement in orange…an unplanned “Block I”. I will enjoy floating this in Michigan State water. 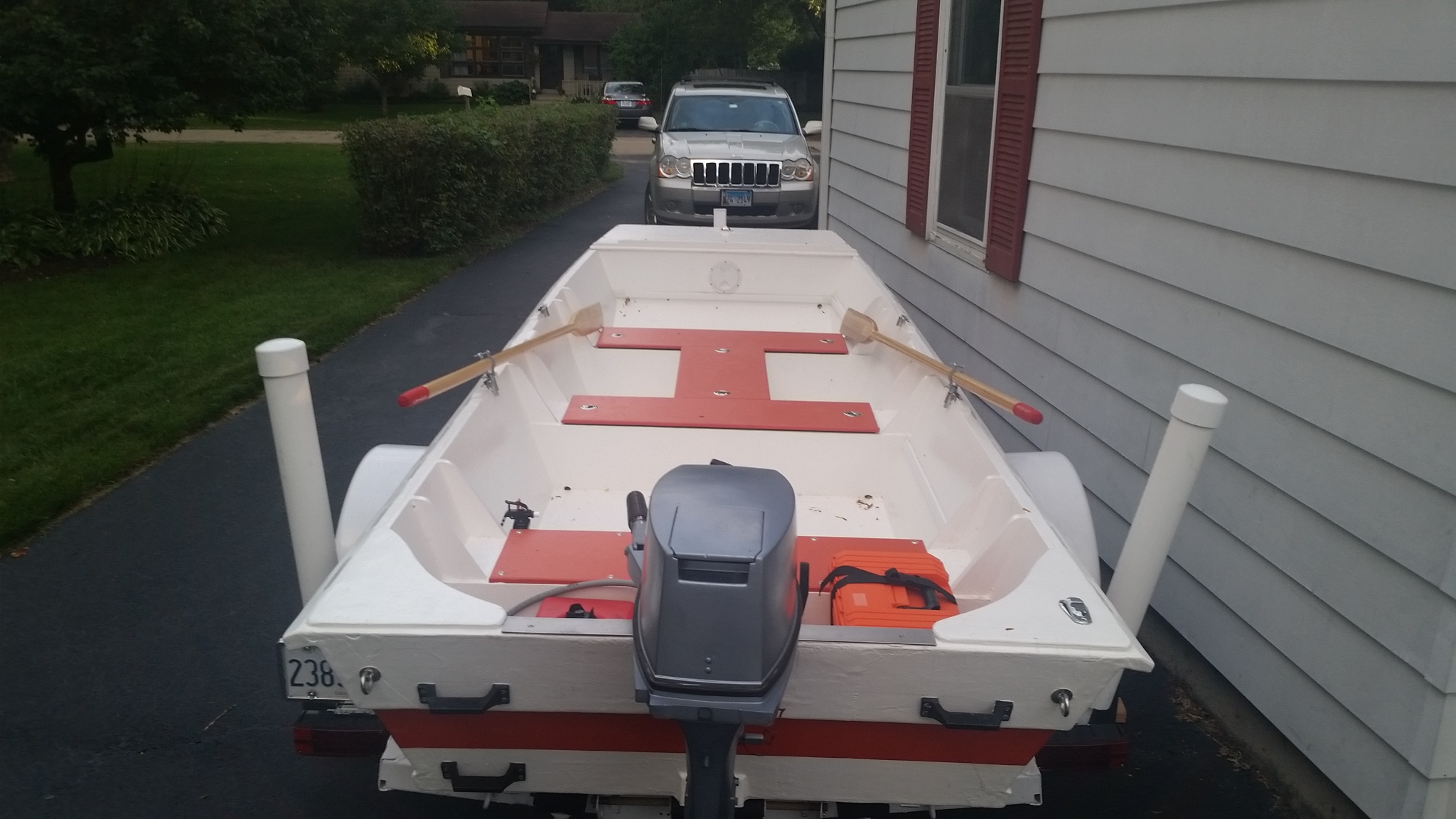 Now, just admire the lines and the S.S. Stampycat decals. 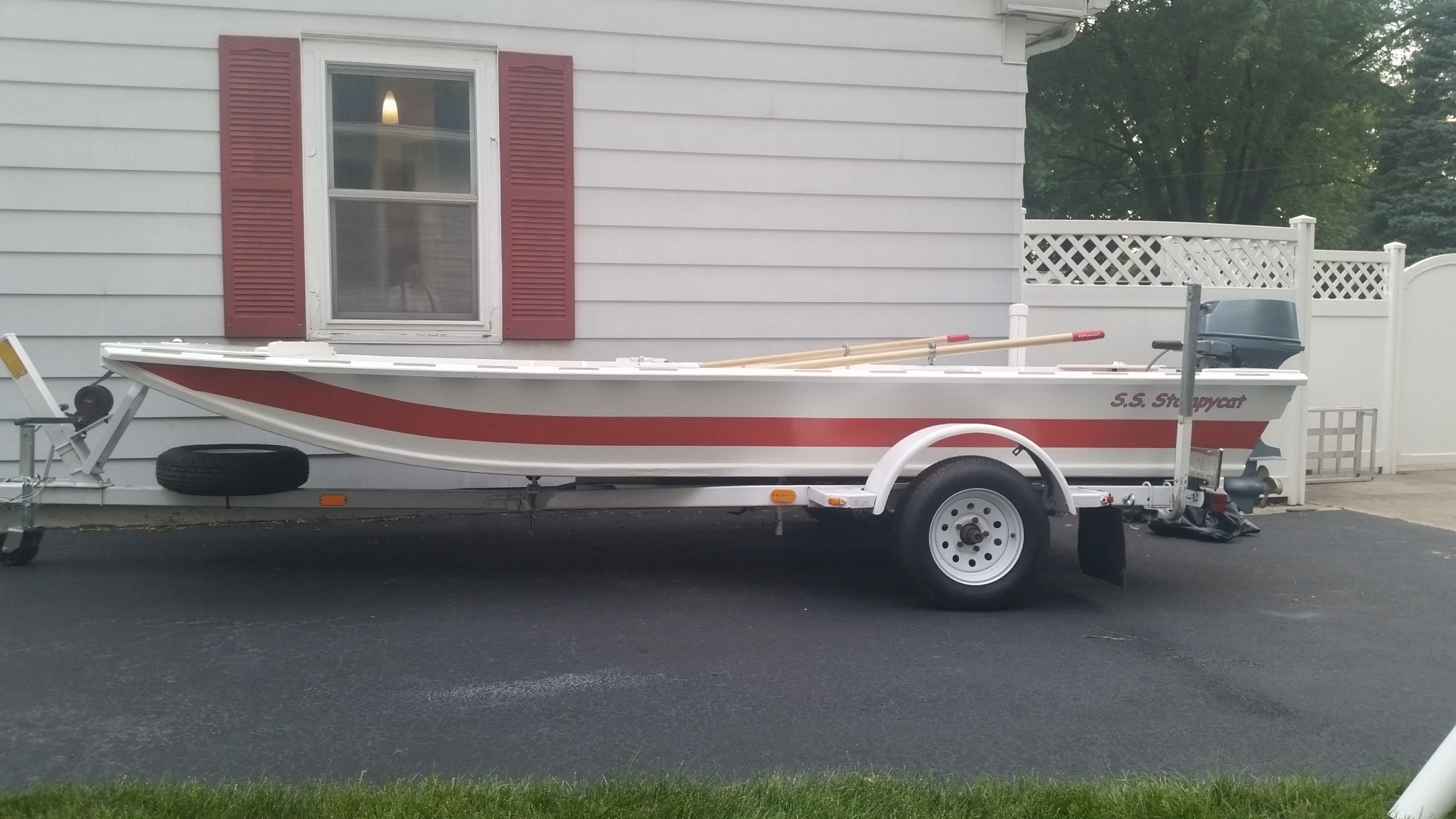 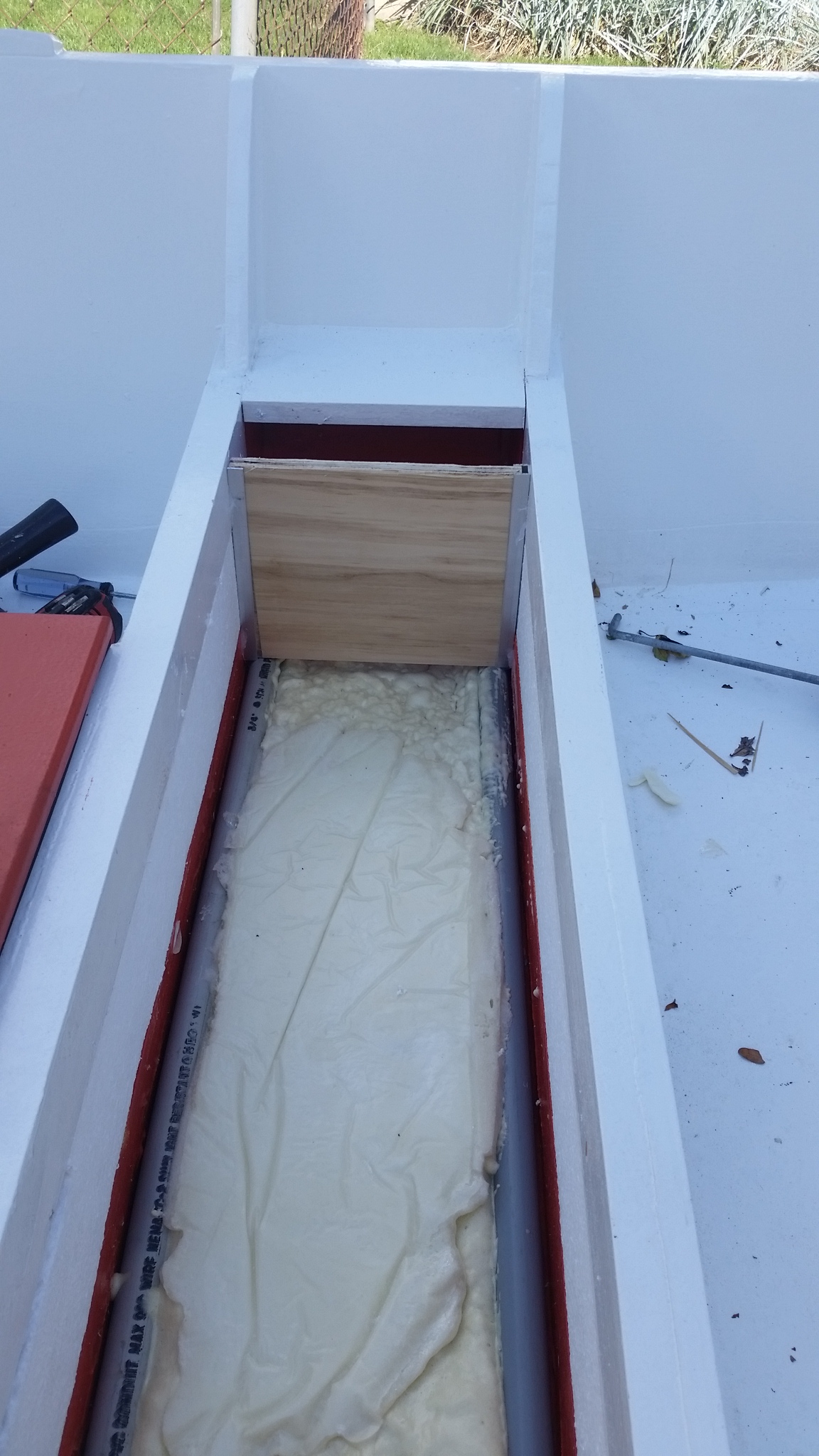 This is the live well under construction.  I set a piece of 3/4″ PVC in each corner and filled the middle with an inch of poured flotation foam. The PVC provides drainage flow and conduit for future electrical wiring or plumbing if needed.

The rest is essentially made of materials left over from building a Koi pond–rubber liner, backing pad, and aluminum channel.  I left a gap on each side with a flap of rubber to cover,  Wire is passed through the end corner to allow for a small pump to aerate the water.  Here’s the finished well in the front seat. It will hold about 9 or ten gallons. When not fishing, it’s a great cooler…

You can also see the latches I used in all of the opening seat tops. Standard fair flat latches, no locks, available online though a variety of sources. There are strips of  aluminum angle on the underside of the seats to keep them in place and weatherstripping to keep all three the compartments relatively waterproof. 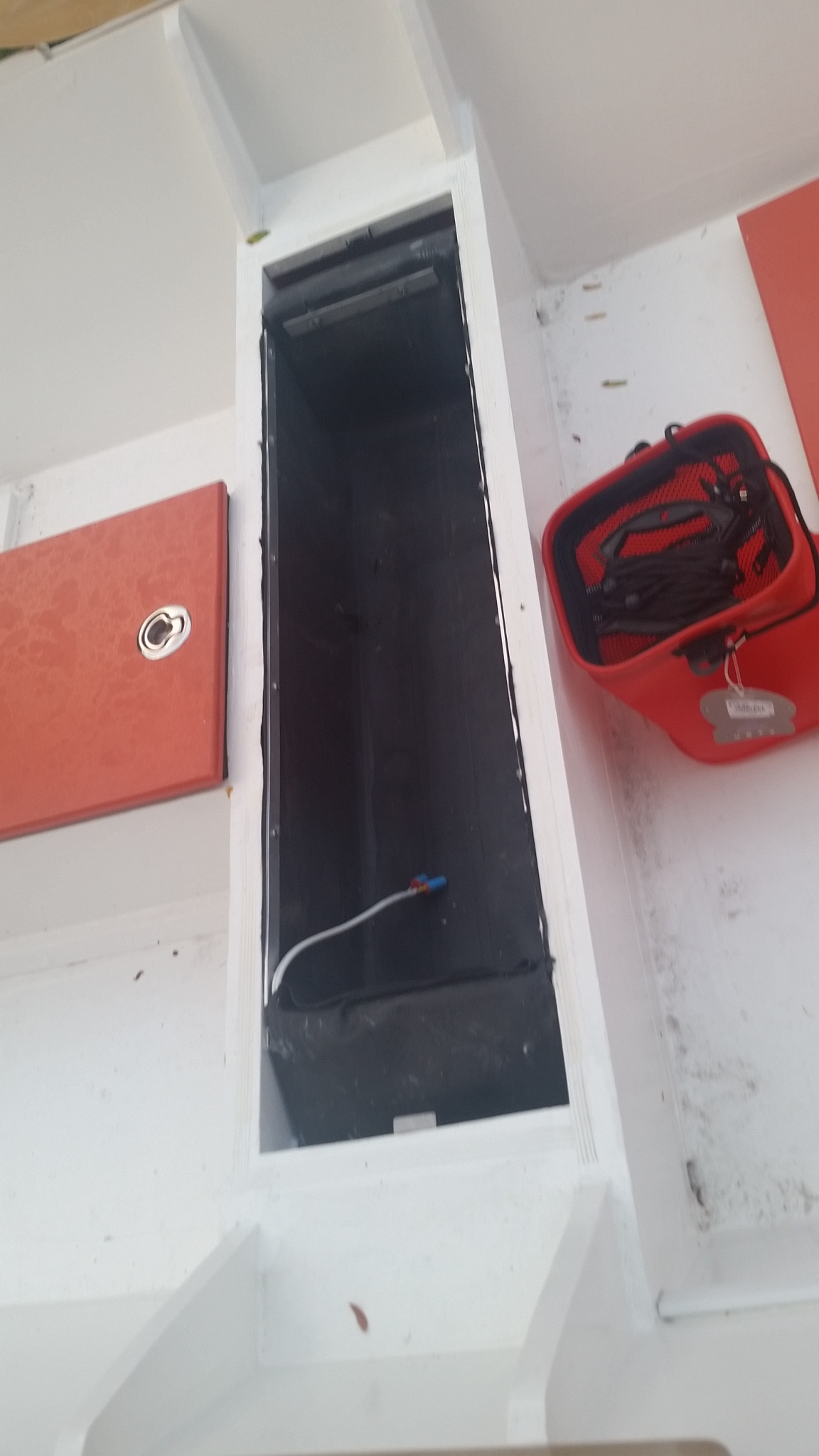 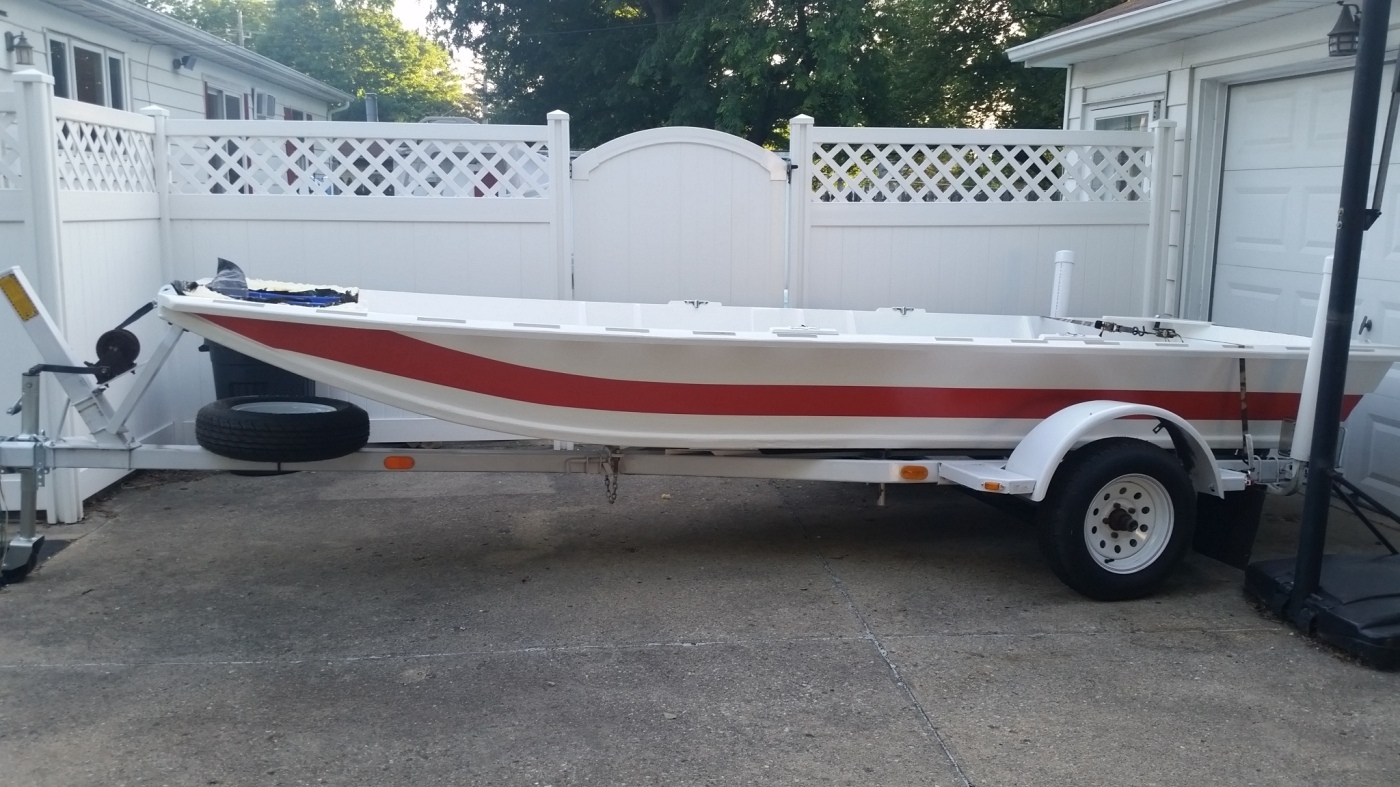 The boat has been moved outside and there are some posts that went missing.  So there is a good deal of catching up to do.

There are seats to make. simply ripping remaining plywood into seat tops and easing the edges with a router…too straightforward.   So here is Philip sanding those tops. The stern seat will be sealed with foam inside.  The others will open, one to be a live well, with removable tops rather than hinged. and of course they need to be orange… 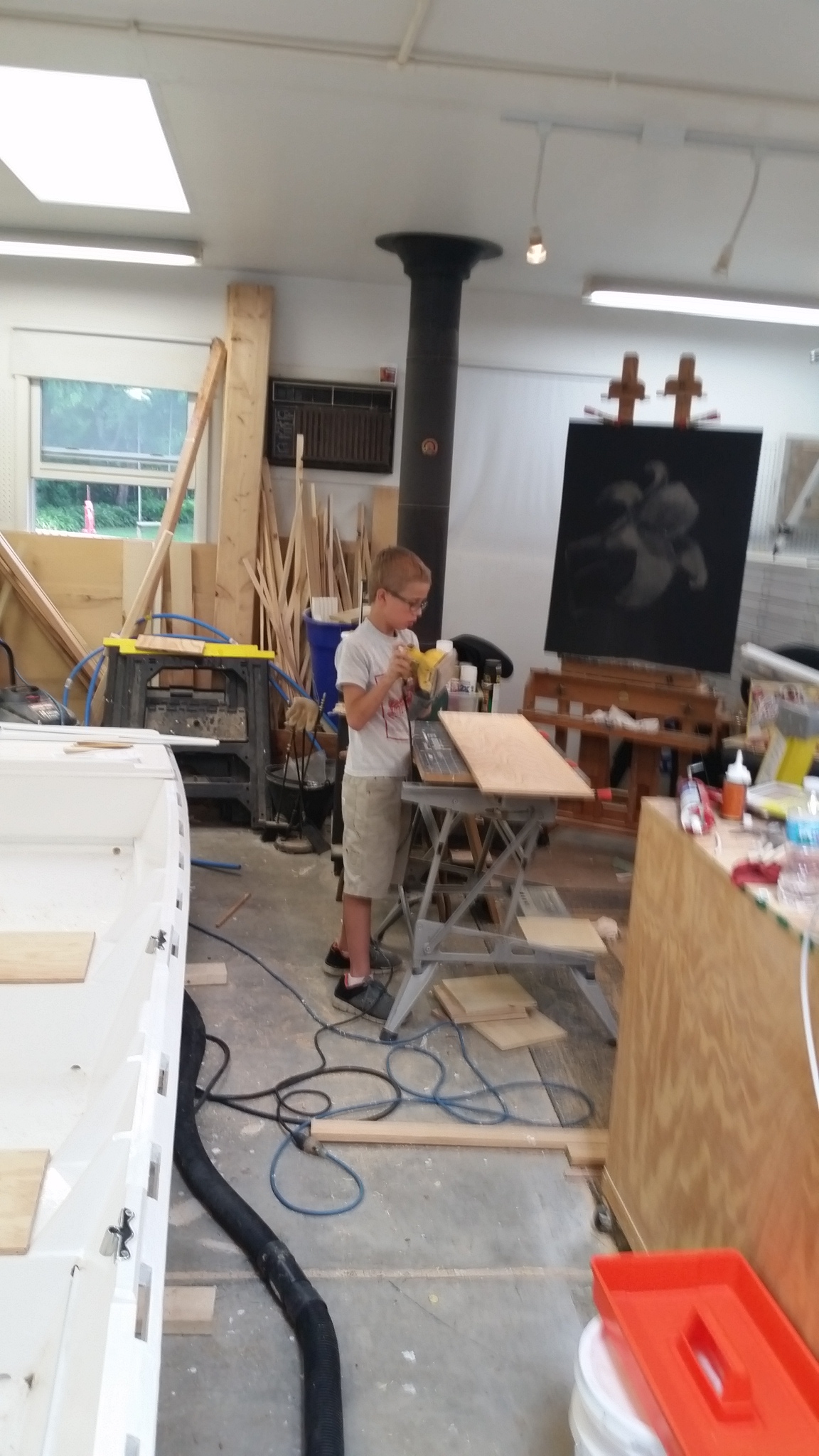 We added poured foam, three kits of 2# and a leftover kit of 6# foam, adding 4.5-5 cubic feet of flotation.  More than enough for a wooden boat that already floats when swamped. 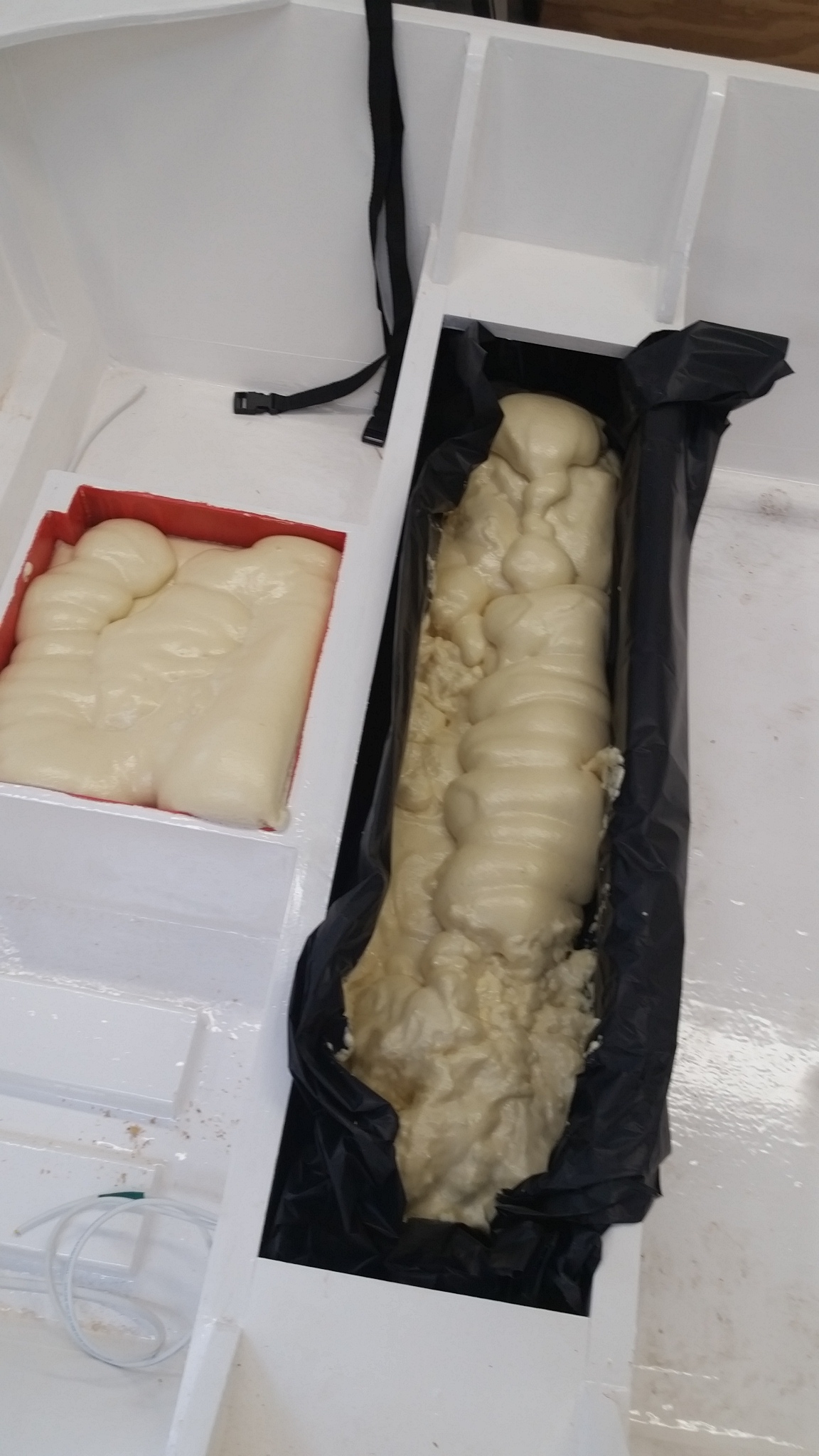 Here you see the stern seat and an additional cubic foot added to the rear to compensate for the engine and motor weight distribution in the stern. Total here is about 3 cubic feet. 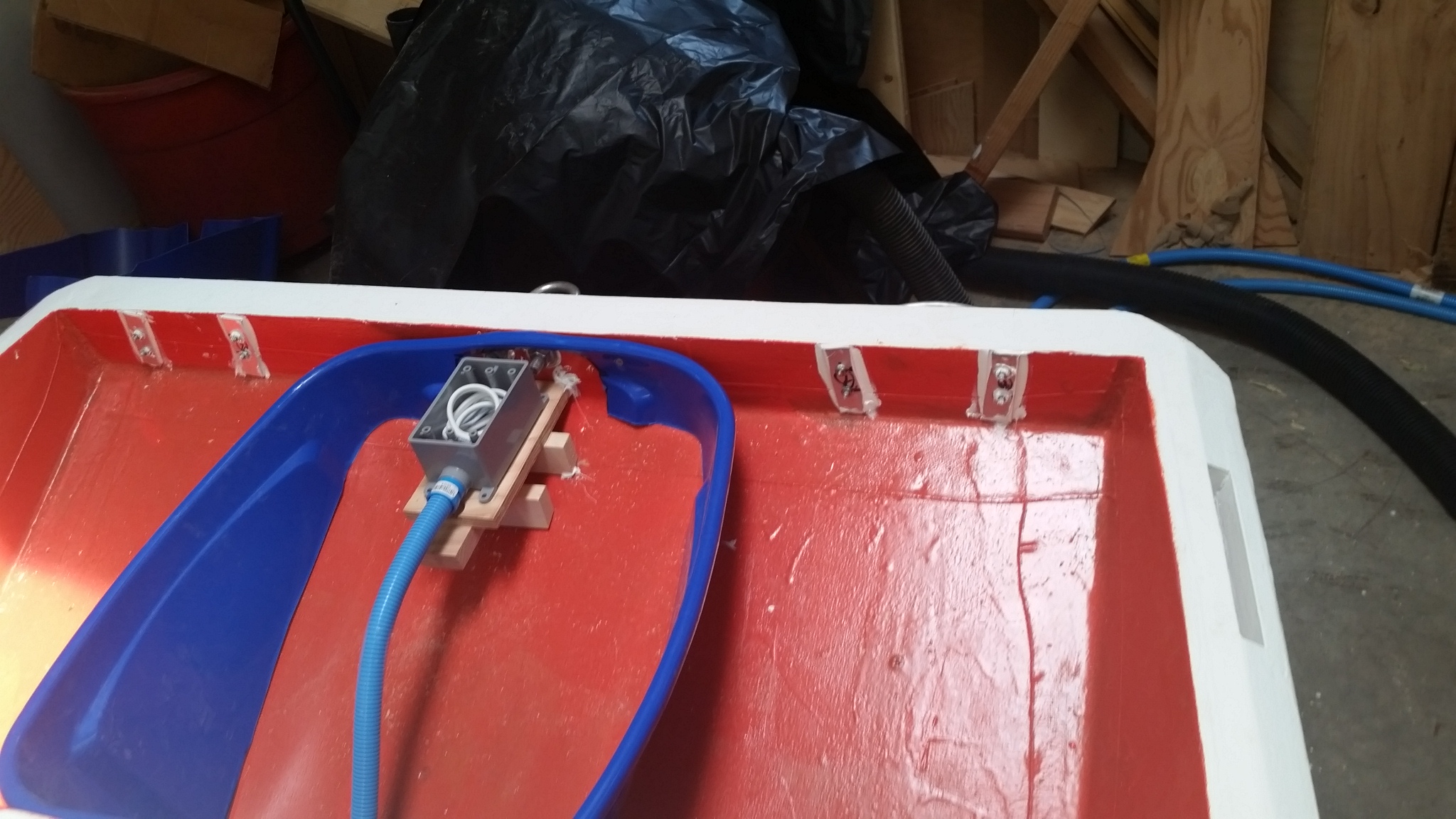 In the bow, we added 2 cubic feet and split it, leaving an access to the light wiring and small storage area.  We used a plastic bin to form it by cutting off the bottom. That’s the first update. 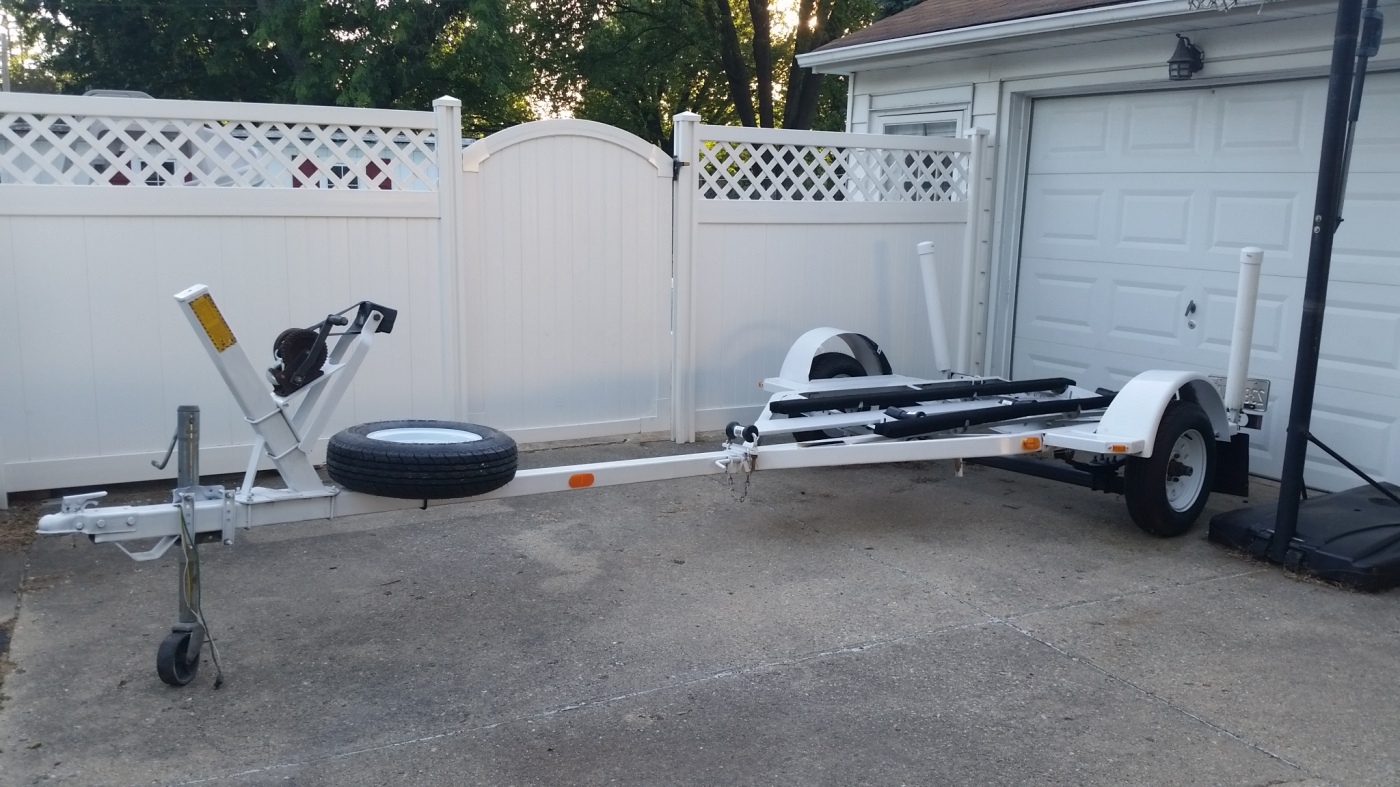 It has been awhile since the last post. We finished the trailer today.  I dropped the bunks to their lowest level and raised the rollers to ride underneath the center and only make contact if the boat drifts to either side. I moved the bunks inside the outer keel ribs. I may put a short second set in after moving the boat to the trailer. 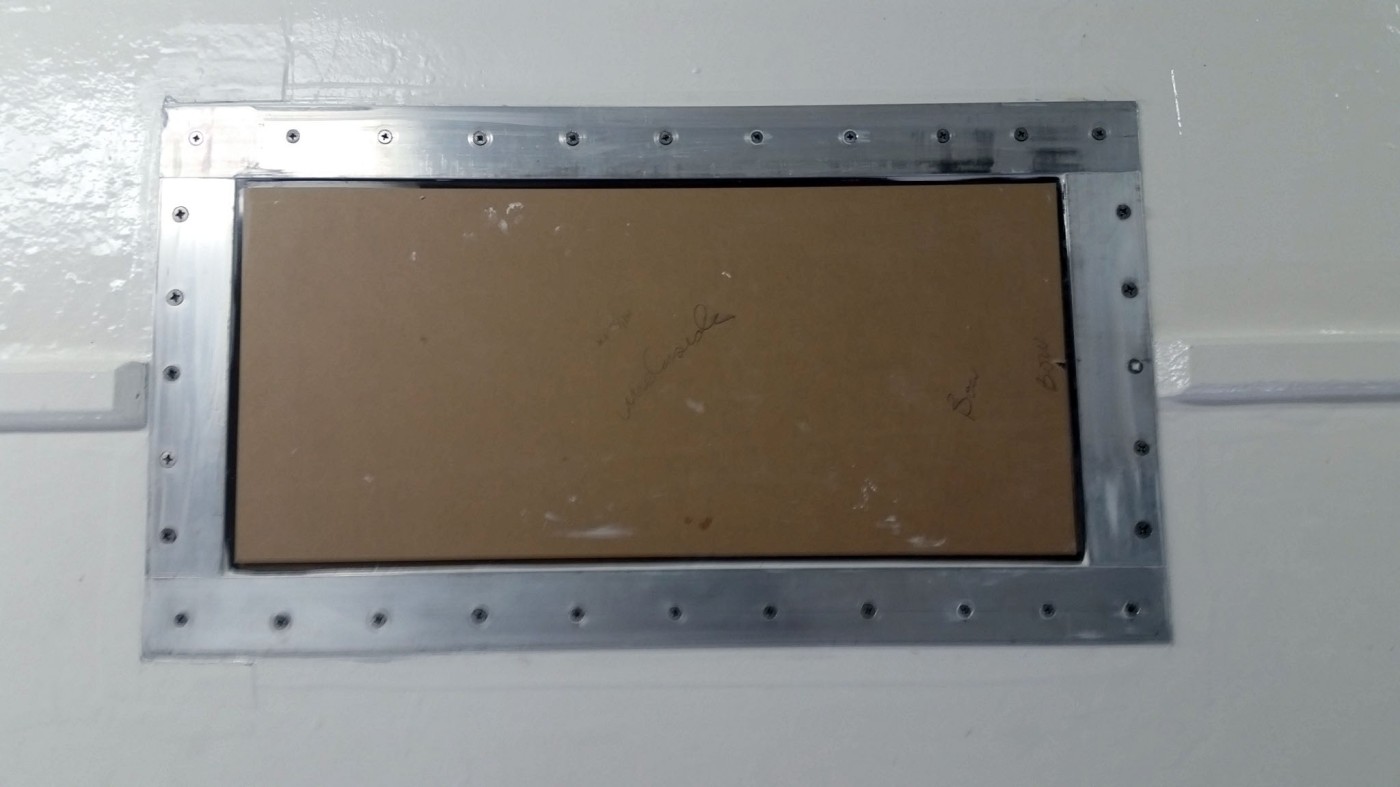 After lots of fussing, the window is in.  Sanding a track for the glazing and the bottom for the aluminum to rest upon was a mess.  This is a hand built boat, not a CNC project so the thickness of fiberglass and epoxy isn’t perfectly even. But, it needed to get pretty close if the thing is going to seal.

The choice of sealant/bedding compound is a bit of an experiment. There are multiple videos and websites, even manufacturer’s charts for what marine sealant to use for a given purpose. What bonds to fiberglass and wood might not bond to Lexan. And the silicons aren’t very strong below the waterline. Apparently sticking a window in the bottom of a boat is really a weird thing. I debated the benefits of 3M 5200, 4200, or using a true silicone like Dow 795 or 3M.  I chose to bed it in 4200 which will keep the aluminum well-bonded to the boat and it is fit for below the waterline.  The last thing we need is for the bond to give out and send a piece of aluminum into the prop while on plane.  The 4200  may have slight adhesion issues with the glazing, so I will trim the frame/glazing edges inside and out with a silicone. This arrangement should be watertight when all is cured. If not, maybe I just stick a bilge pump in the window well.

We also got the drain plug fitting and the bow eye installed. That means the hull is done and we can begin fitting out the boat…stuff the boys can work on with less toxicity. 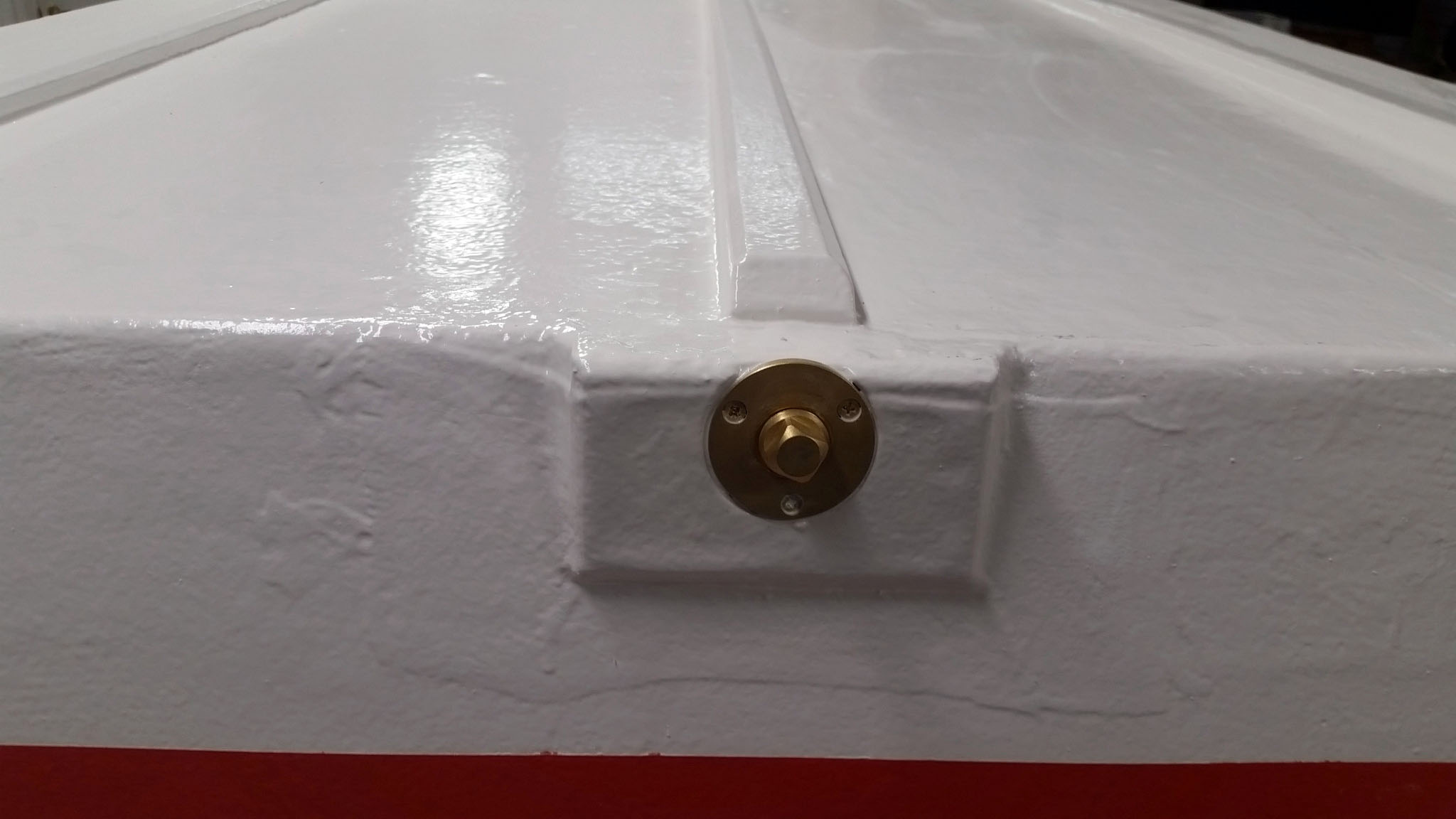 Of course, that means we have to turn the boat over again…Looking for three healthy backs to help with that step. 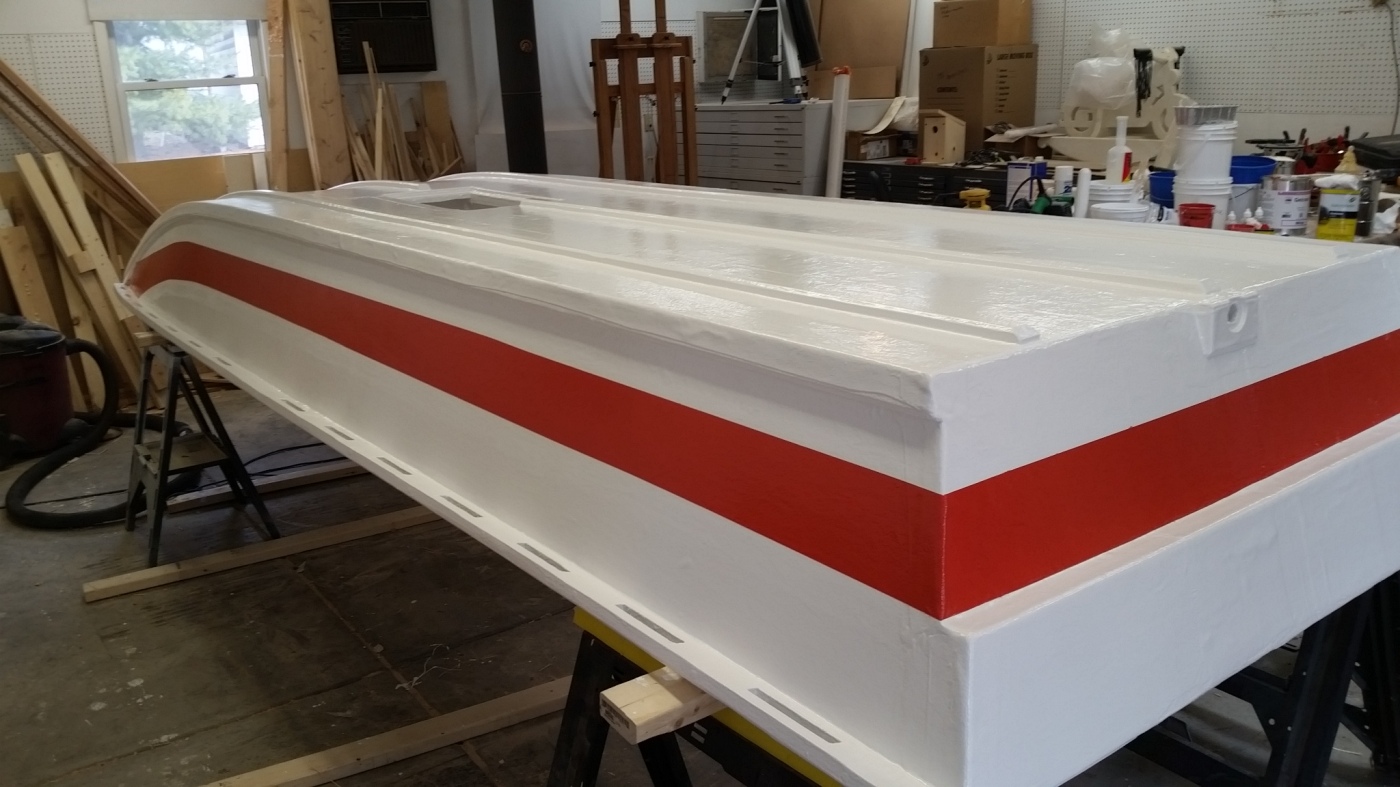 So there it is, the orange stripe that will give the boat its name…Stampy.  Philip and I masked off the shape after working through exactly what he wanted to see.  He seems to have a pretty good sense of design and even managed to improve on my suggestions. 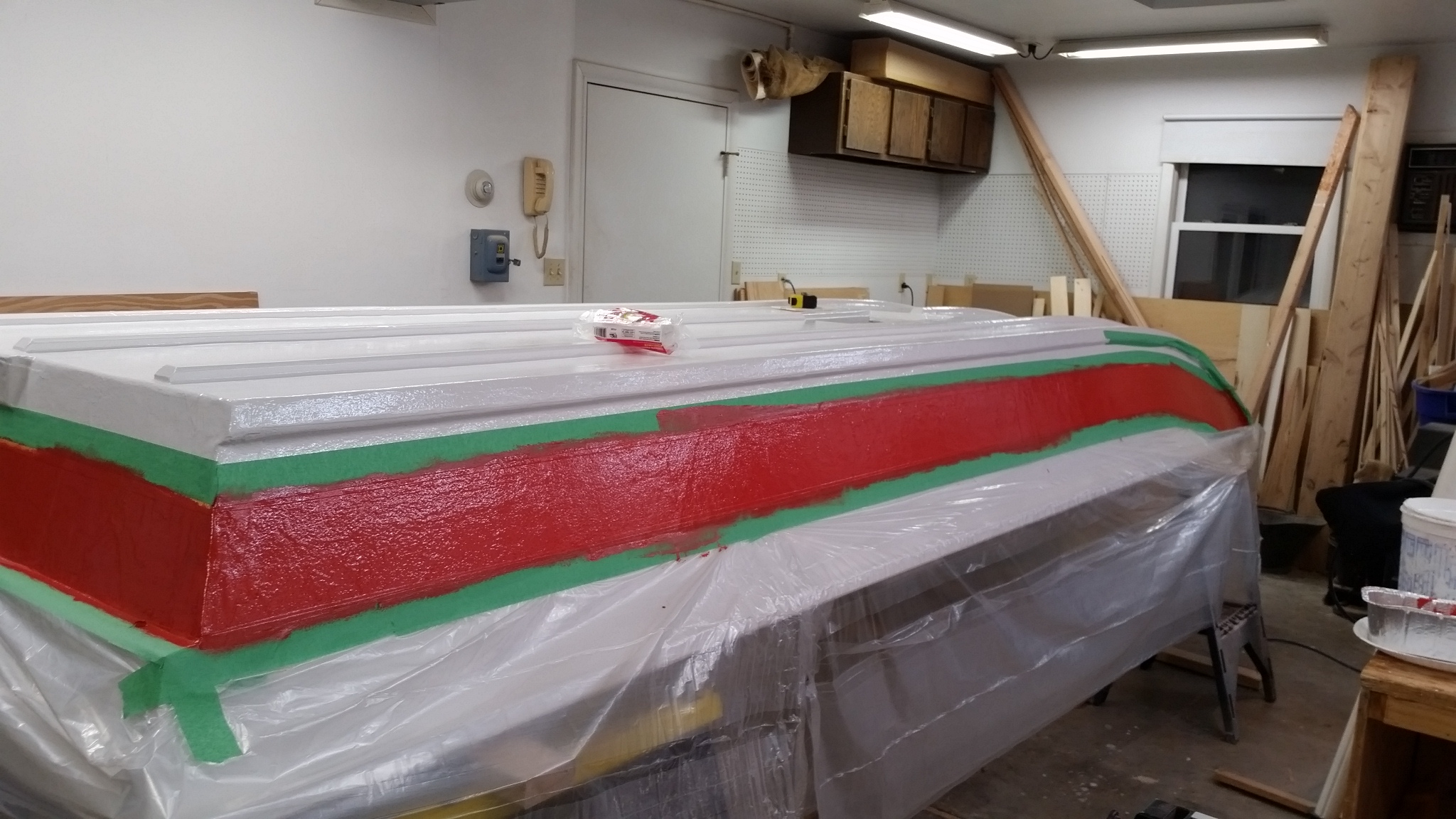 The gel coat is FGCI Ultra Plus brushable gel coat.  Three coats–mostly to make sure it is thick enough to take a scuff or two.  I used the excess of each 1 cup mix to coat the inside of the seat compartments.  These will not be visible, but I figured a layer of gel would only serve as additional protection and sealer. Waste not, want not.

Unfortunately, they don’t make an orange tinted gel coat…so we bought a quart of canary yellow and a quart of vivid red and mixed the color.  I gave him a choice of mixes and he chose a simple 1:1 mix (Thanks. buddy!), though it is a touch redder than I thought he’d want.  It looks great though.

There are a couple of small bleed spots, but nothing that isn’t easily fixed.  I did use an automotive making tape that bent easier and sealed better. It did work well and I sealed the edge further with a thin layer of white gel before using the orange. I came over it with a standard green masking tape to anchor the plastic drop cloth.All of this did well in protecting the boat from dripping.  However, the masking tape did leave adhesive on the white coat…  If you look towards the bow in this photo, you can see the residual adhesive. 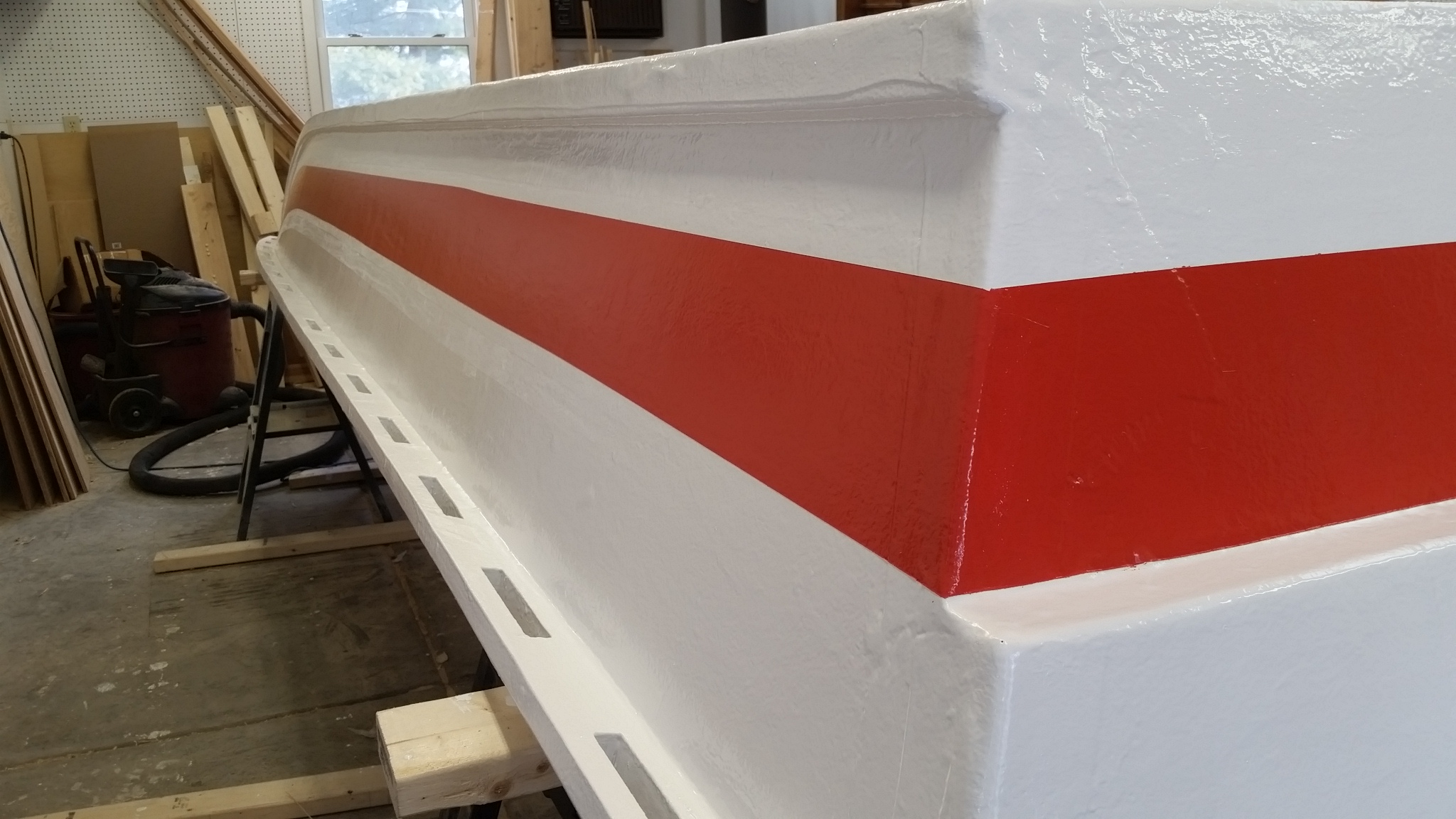 Cleaning that adhesive up will be a bit of a mess.  I tried a number of alternatives that I found on the Wooden Boat Forum. Most of these were less than effective and did affect the finish.  What seems to work best is  citric based adhesive remover (Krud cutter) followed by hot water and tsp (removes the oily residue).  However, the orange stripe isn’t fully cured yet and the adhesive remover does remove a slight bit of the surface.  It doesn’t seem to affect the white that has been cured for a week, so I shall work on the virtue of patience and settle for a day off and watch the Superbowl with Philip instead. Next weekend will suffice.

It looks a lot like a boat now.  After a little cleanup, the hull will be done.  We move on then to seats, flotation foam, and hardware.  We are waiting on delivery of a piece of stainless steel plate to make the window frame–that will be a days work by itself.